This year we’re going virtual and offering flexibility in our conference format and layout. We strongly encourage you to visit our website to review and register for each session you’re interested in attending.  We are excited to welcome you virtually and hope you enjoy all that we’ve created with you in mind. The conference has an incredible speaker lineup and we can’t wait to learn which sessions you’ve attended. Enjoy the conference and don’t forget to check our website for more updates. Tag Morton College on social media with hashtag #MCWEC in all your posts and conference reflections. Thank you for supporting this event! Morton College Women’s EmpowHERment Conference Committee Ana, Blanca, Gabriela, Maria, Marisol, Sara, and Wendy
Sign-up for our Newsletter

A Fireside Chat: Finding Success For Women In Banking and Finance

An open conversation about stigmas, breaking barriers and finding your passion to generate wealth in the banking work place.
View Recording

Jeanette is a cross between a culture curator, project manager, and business developer. She brings her roots to the workplace, servicing the Hispanic community and their dreams of building wealth through Homeownership by building divisions around inclusion for marginalized minorities.

Aracely graduated from the Driehaus College of Business at DePaul University with a Bachelor of Science in Business and a concentration in Honors Marketing. Before entering the world of business, Aracely dedicated herself since a very young age to serving her community. From walking the streets of Pilsen mobilizing thousands of registered voters, to developing local volunteer recruitment strategies, and creating programs for young adults to lead within their communities, her biggest passion has always been to empower those around her. Coming from a top-producing team at The Federal Savings Bank, Aracely’s extensive knowledge of the entire loan process and available programs, coupled with her problem-solving skills and commitment to excellence ensures that each client receives superior guidance. Aracely is especially passionate about helping diverse communities invest and pursue one of the most personal investments of their lifetime by becoming home owners and educating her peers on the tools needed to thrive financially. Born and raised in Chicago, Aracely now resides in the Western suburbs and has been a part of the diverse vibrant cultures and traditions that make Chicago so great! During her free time, she loves to make memories with her family, especially with her favorite little human being (her niece of course!). Aracely enjoys traveling because it allows her to see the world through a different lens and learn about other cultures. https://www.thefederalsavingsbank.com/bankers/aracely-palomino

Magaly Alonzo has always had a passion for the financing industry. She started her career in the industry managing and developing a call center for a short-term loan division in the Chicagoland. Magaly spent several years there before she made a career transition to obtain her license as an insurance agent. After working within the insurance industry, she made the decision to return to financing as a Mortgage Banker. Magaly continues to work today as a trusted and reliable Mortgage Banker. Magaly brings excellent communication skills, strong attention to detail, and outstanding customer service to her role as a Mortgage Banker. Her goal in every transaction is to identify and deliver the best mortgage program options to her clients that meets their home financing goals. Magaly has access to a wide array of loan programs that can help clients in all states. She is fluent in both English and Spanish. Because of her extensive knowledge in customer service and sales, Magaly offers a unique and comprehensive approach to the home buying process that is valuable for all her clients from first time home buyers to seasoned homeowners. Magaly was born and raised in Chicago, and now resides in the West suburbs. When she is away from work, Magaly loves spending time and making memories with her husband, two children and two dogs. She enjoys crafting, couponing, watching movies, outdoor activities and eating chocolate cake. https://www.thefederalsavingsbank.com/bankers/magaly-alonzo

Maggie Martinez is more than a mortgage adviser, she is a mortgage expert. Her financial and real estate background give her a significant insight into her clients’ options. As a Vice President of mortgage lending, Maggie offers honest advice on any home loan. This ranges from a first-time home buying experience, to purchasing a vacation home or investment property, to refinancing any type of residential mortgage across the country. Her versatility is an asset to her clients, along with her youthful demeanor. She is a wife and a mother of two young children and can relate on what the process of home buying means not only for an individual but for the whole family. Maggie truly loves to make the experience of home buying one to remember fondly. Maggie has dedicated her entire business to providing outstanding customer support by providing caring and sound advice with full transparency. Interested individuals are invited to apply online or contact her to set up an appointment. Either way, anyone who reaches out will get Maggie’s immediate and personal attention. https://www.thefederalsavingsbank.com/bankers/maggie-martinez

Bernie Miller, bank owner and Executive Vice President, has been developing loan officers in Chicago and the Midwest since 2002. He is dedicated to coaching his team, both professionally and personally, to reach their full potential, and then push past it. He directly leads a team of over 100 Bankers and support staff. Whether you’re an established banker who has outgrown your current company, or a newcomer to the industry who is looking for guidance, Bernie is here for you. Bernie has a passion for people, which is made clear through his coaching program. He will fail with you, succeed with you, and be there to support you through all the in-betweens. Stop working for someone, and starting working with Bernie Miller. Bernie graduated from the United States Military Academy at West Point, NY in 1992. After being commissioned as an Army Officer, he graduated from the U.S. Army aviation flight school in 1993, and served as a Cav/Scout helicopter pilot, primarily flying the OH-58D “Kiowa Warrior”. Bernie served in several Cavalry units during his 9-year career, earning several distinctions, including 2 Meritorious Service Medals, the Order of St. Michael, and the Senior Aviator Badge. Bernie lives on the north shore of Chicago but grew up in the Denver area. Bernie and his wife have 3 sons & 2 daughters, whom share a love of music & performing. Bernie currently supports several veteran related charitable organizations, including Bunker Labs, wear blue: run to remember, and the USO of Illinois. Bernie and his wife Tammy also volunteer with the Archdiocese of Chicago and teach Pre-Cana classes to Catholic couples. Bernie loves to work, but in his free time Bernie is very active with his kids, enjoys “date-nights” with his wife and is an avid golfer. https://www.thefederalsavingsbank.com/bankers/bernie-miller

As a queer, Black, Woman of Color, Paige takes interest in scholar-practitioner work that centers intersectional identity development among students, staff, and faculty in higher education and student affairs. Her passions for solidarity and liberatory praxis mirror the love, support, and advocacy she received from prominent Women of Color professionals in student affairs. Inspired by the African proverb, Ubuntu, “I am, because we are,” Paige strives to build community, foster resilience and share experiential knowledge with those who hold marginalized identities.

Kristina comes from a large, close-knit family with roots in Texas, Cuba, and Spain. She is a Chicagoland local who was a commuter student for the entirety of her collegiate career. As a higher education professional, Kristina is passionate about working with first-generation college students and supporting the leadership development of Women of Color within higher education. Kristina’s research passions include Latinx college student leadership development, commuter student sense of belonging, instructional design, cultural values clashing, and campus racial climate.

Pearl Ratunil is a Professor of English at Harper College. Her publications have focused on issues of race and ethnicity in medieval European Literature. She has also developed expertise in contemplative pedagogy in higher education and leads workshops on mindfulness and contemplative practices. From 2017-2019, she served as Special Assistant to the President for Diversity and Inclusion at Harper College, and from 2016-2017 she served as Chair of the Academy for Teaching Excellence at Harper.

This workshop provides a community for women pursuing academia and higher education. As a collective, cultivating sisterhood has been the key in overcoming Imposter Syndrome (feeling of inadequacy after evident success). In spaces that have historically excluded women from higher education, creating spaces that nurture and encourage their academic pursuits is crucial. These spaces have become spaces of growth, solidarity, and transformation. In this workshop, participants will hopefully gain insight on how to navigate and confront imposter syndrome, build solidarity, and empower one another.
View Recording

Aidé Hernández is a Mexicana who was born and raised in Chicago. She has been a community organizer around issues of adequate public school funding, affordable housing and immigration rights for about ten years. She is currently a second- year Sociology Ph.D. student. Her research interests focus on the identity development of Indigenous & Afro Latino/as in Chicago and mixed-status family history.

Ana María Hernández is a Libra and Chicago native. She is currently a second-year Sociology Ph.D. student. Her research interests include Afro-Latin America, Race in Latin America, and the African diaspora in Colombia.

Marisol Jimenez is a Mexicana and cat mom who loves to watch movies. She enjoys traveling and doing yoga in her free time. She is currently a second-year Education Policy Ph.D. student. Her research explores the Latina experience through the school choice process in Chicago. 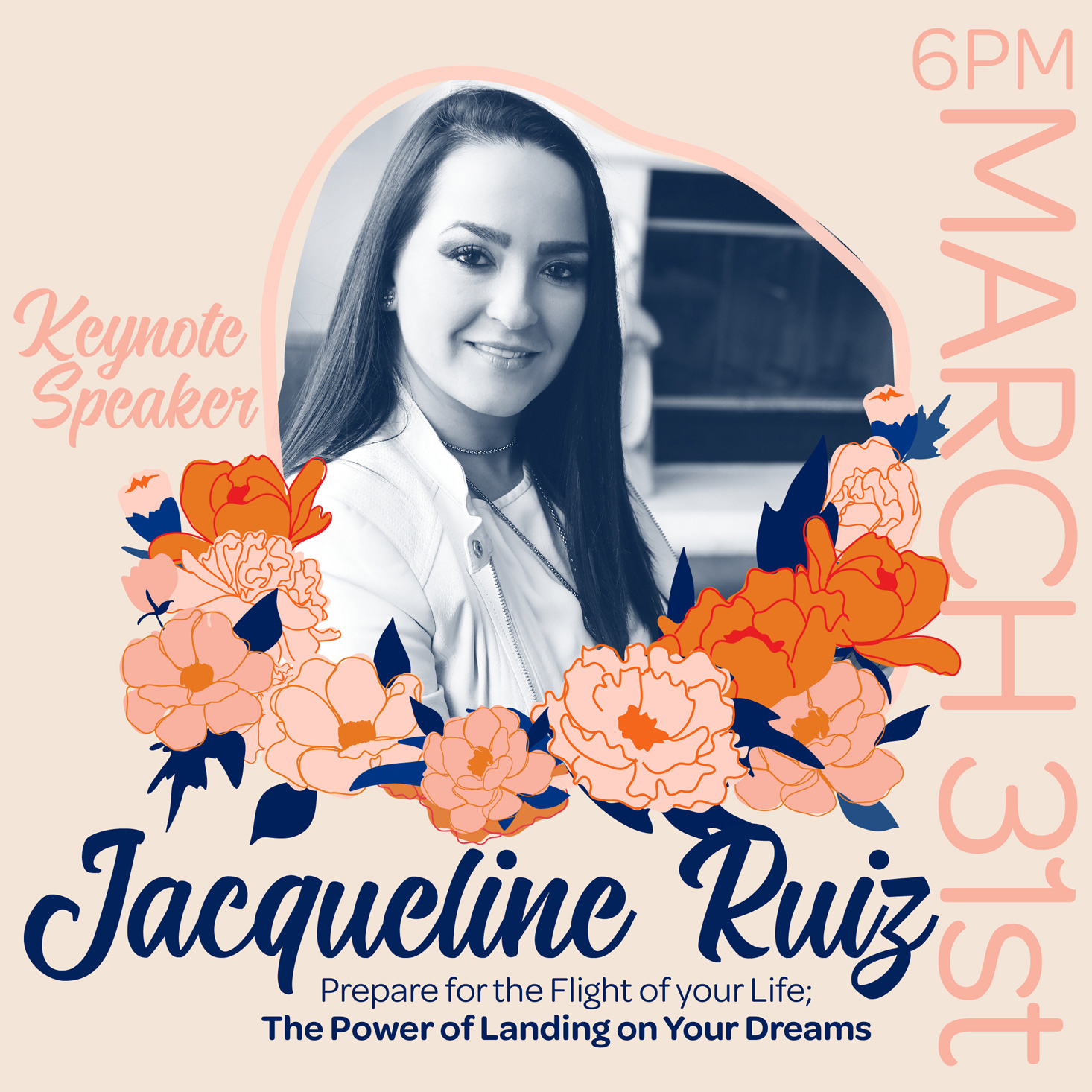 Jacqueline Camacho is a visionary social entrepreneur that has created an enterprise of inspiration. Her keen sense of service coupled with the vision to bring good to the world have led her to create two successful award-winning companies, establish two nonprofit organizations, publish 24 books, create over 10 products, and has held dozens of events around the world in just the past decade. She is often referred to as a "dream catcher" as her strategies have supported thousands of women, authors and young ladies to live a life of significance. Jacqueline's quest to be a servant leader extends to every area of her life. She has shared her inspiration in four continents and aligned with some of the most powerful brands to elevate others. At only 37 years of age, she has achieved what most would not do in an entire lifetime. Being a cancer survivor sparked a sense of urgency to serve and transcend. Jacqueline believes that magix (yes, a made up word that means magic x 10) is the interception of profit and impact.
She is one of the few Latina sports airplane pilots in the United States and is about to embark on the historic air race that 20 women flyers participated in crossing the United States 91 years ago, including the famous Amelia Earhart. Jacqueline believes that "taking off is optional, landing on your dreams is mandatory.” pilotina
View Recording
View Previous Workshop Recording
Sign-up for our Newsletter
X